The secret to a happy relationship? Try it and see. 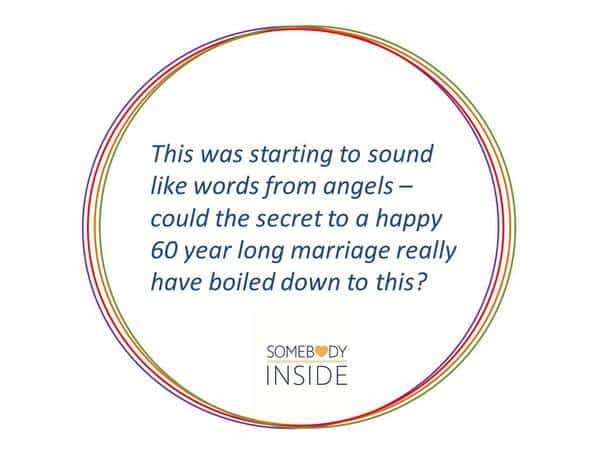 Nic here.  How are you friends?

I love to hear the wisdom of others. I often find myself particularly drawn to those who are elderly – they have so much to share and they have reached that stage where they have truly LIVED.  You know what I mean?

They’ve realised that not ALL the answers are found in a book (Danielle may have an alternative view here…) and have gone out into the world, practiced, learned, failed and more often than not, stopped sweating the small stuff.

It must drive them a little mad sometimes when they share what they know and we crack on and do our own thing anyway, making the very same mistakes that they already warned us about.  Except they’re wise.  They know that’s what we’re going to do.

One day, we were sitting soaking up the company of my fabulous elderly neighbours (they’re both in their 80s before anyone calls the ageist cops) and I asked them – what’s the secret to a happy marriage then?

(They felt like the right people to ask since they’d been married for over 60 years.  AND they were still talking to each other).

In one brilliantly synchronised voice, they looked at each other, smiled and said,

OK, so not quite what I was expecting.

“Oh yes”, they both nodded enthusiastically, “they are a wonderful thing”.

Bringing you out in a cold sweat yet?

I don’t know about your house, but in mine, even the idea of ‘jobs’ makes My Boy come out in hives, temporarily go deaf, or has him whizz straight out the door with something urgent (the pub).  Sometimes, it can be all three – though he usually saves that for the times I mention putting up shelves.

And yet Donald, (Mr Blue I’m guessing) was grinning just as wildly as Jean (Mrs Pink).  Surely this was going to be a gem.

Ears pinned back, I relaxed and waited, open and eager to hear the whole story.  Was this really going to be a game changer?

“We all know that living together and running a home involves responsibilities.

And often that means tasks or jobs that need to be done.  Sometimes daily, sometimes weekly.  They just need doing.  Especially if you want a happy household.  One that runs smoothly.”

(I know this already by the way – it’s The Boy who thinks they happen by magic.  Anyone see that YouTube video on the Magic Table?).

“And it’s important that everyone who lives in the house contributes – that’s all part of living together and also looking after each other.  Showing another that you care about them enough to share the load.”

This was sounding like words from angels. (The Boy was starting to squirm and look at his watch).

“The great thing is that there are some things that are just easier for some people to do or they even LIKE to do it.  And when that’s the case, it’s not even a job really, it just gets done.

So the idea is simple.

You sit down with your partner and think about all the household chores that need to be done and you allocate as many as you can to your preferences.  It’s a two-way thing, done with openness and honesty.  It’s really very easy.”

“Sure!  Right now, ask yourselves what would you be happy to take responsibility for?”

So, I’m guessing they would be Pink Jobs now right?

“Yes.  IF your partner agrees…”

Boy nods emphatically.  He doesn’t like ANY of them and all of a sudden seems to be back in the game.

“Blue jobs then.  What do you LIKE to do AND what could you offer?”

So, Pink does the Pink Jobs, Blue does the Blue Jobs.

No interfering.  No dictating when it gets done.  How it’s done.  It’s covered.

And then you crack on.”

Honestly, ladies (and gentlemen in case you’re reading) it really is a total game changer.

Because you have your jobs and you CHOSE them.

All feelings of overwhelm, resentment or general grumpiness go, you’re in it together, helping each other.

We have a joke in our house – ‘Blue can do Pink jobs, but Pink doesn’t do Blue’.

And it’s not true.

I find it feels good sometimes to say – want me to do the recycling for you?

And to know that things that used to really niggle us like the huge pile of unopened envelopes, (“everything is on DD, I’ll do it one day…”, Me; “grrrrrr!) or the urgency on washing up when “the dishes aren’t going anywhere…’ Me; ‘Exactly!!’) are now all in the past.

Another bonus, is it really builds gratitude and appreciation too.

You see stuff too.

I saw that I was amazingly good at saying no to help, probably because I liked control and perfection and (hard to admit!) I also saw that there was a tiny part of me that thought running a home was a woman’s job.  Just how CRAZY is that little voice in my head?

Yes, I WAS MAKING IT SUPER HARD FOR MYSELF.  (Oh, now there’s a theme…again!)

I saw that he wants to contribute too – and I wasn’t letting him.

It’s so lovely coming home and knowing that there’s food in the cupboard and my tea is made.  Every night.  I feel cared for.  And loved.  He feels valued and knows he is looking after me in a way I just wouldn’t do for myself.

And I see how not everything needs to be perfect – it just needs doing.  With two people pulling together, so much just happens and there’s space to do what we really want to do.  we get to appreciate each other and what we bring to creating a home that we can both enjoy and importantly relax in.

We’ve used Blue Jobs and Pink Jobs for over 2 years now and it’s a dream.  Most of the time.

Why not try it?

Off to B&Q.  Apparently CHOOSING the shelves is a Pink Job…